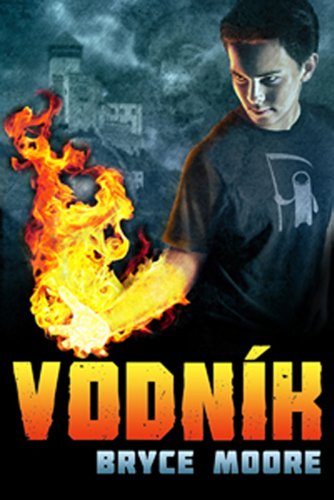 When Tomas was six, someone–something–tried to drown him. And burn him to a crisp. Tomas survived, but whatever was trying to kill him freaked out his parents enough to convince them to move from Slovakia to the United States.

Now sixteen-year-old Tomas and his family are back in Slovakia, and that something still lurks somewhere. Nearby. Ready to drown him again and imprison his soul in a teacup.

Then there’s the fire víla, the water ghost, the pitchfork-happy city folk, and Death herself who are all after him.

All this sounds a bit comical, unless the one haunted by water ghosts and fire vílas or doing time in a cramped, internet-deprived teacup is you.

If Tomas wants to survive, he’ll have to embrace the meaning behind the Slovak proverb, So smrťou ešte nik zmluvu neurobil. With Death, nobody makes a pact.

For some reason I had a really hard time writing this review– not because I didn’t like Vodnik, but because there’s so much stuff to talk about that I couldn’t figure out where to start! Vodnik has got almost everything I want in a YA book: it’s set in a non-US/non-England location, it stars a not-completely-white kid, it’s got exciting action stuff and fun fantasy elements and it ALSO deals with discrimination and bullying and death! And it’s not even that badly written; if I was a teenage person I’d probably love this book a lot. As an adult person, I LIKE it but I’m not overwhelmed with my love for it.

I think my main problem with Vodnik is that, while I like the inclusion of realistic prejudice and bullying, and the aftermath of madness and death in families, and all the rest of the non-fantasy stuff, I think the actual execution of that stuff was a bit clunky. I didn’t really like the writing. It’s a lot better than some other books I’ve read, but there was just something about it that I didn’t enjoy. It felt like the kind of early writing you’d expect from a newbie author, like it’s about two steps away from being great. Sometimes I can handle nearly-great writing (mostof the time I can handle it, actually), but this was one of those times when I couldn’t, unfortunately.

The story was great! It’s a kind of fantasy coming-of-age story (a la Percy Jackson), which I always enjoy reading about, and I LOVED the fact that the fantasy things weren’t your usual western European/US mythological things. Plus the non-EU/US mythological things weren’t Americanized/shifted to focus on America/etc., either! Do you know how rare that is? That, almost more than anything else, made me like Vodnik. I don’t know anything about Slovakian mythology, but after reading Vodnik I definitely want to find out more.

So I suppose my feelings towards Vodnik are all mixed up. On the one hand, I liked certain elements that were in Vodnik. I also really liked the characters! And, overall, it’s not a bad book. On the other hand, there was just something about the writing that I didn’t like. It’s not terrible, like I said! But it definitely affected my enjoyment of the book as a whole. However! I liked it enough that I’d for sure read the next book in the series. And who knows? Maybe I’ll like the writing more, too!

I liked it, despite my dislike of the writing style.

Get your own copy @ Amazon or BookDepository.com and support Birdbrain(ed) Book Blog through the power of affiliate earnings! Or find a copy in your local library and support people other than me!

Sony the Book Lover: “I thought the story was original, the setting was amazingly quaint and old world. I was introduced to Slovakian legends which I thought was cool. The pacing was ok there were moments when the story stalled for me but overall I enjoyed the experience.”

Y.A. Reads Book Reviews: “Within the first hundred pages the novel started to become rather cheesy. The story focused on a specific fairy tale, the vodnik, who drowned people to put their souls in his teacup collection. The vodnik’s teacups were his pride and joy, and I could not help but feel that that idea took away from the novel. It almost seemed as if this novel would be great for teenage boys. However, I am not sure if this book would appeal to anyone above the age of sixteen.”

Charlotte’s Library: “Tomas is a great character to spend time with–I found him to be completely convincing and very likable. He has a lot on his plate. Not only must he deal with the standard angst of teenage life (made more angsty, in his case, by his badly scarred arm from the childhood fire), and the standard middle grade/YA fantasy angst of facing down supernatural creatures, but he’s also faced with culture shock and racial prejudice for the first time. Plus his family’s return to Slovakia forces them to confront buried family history– lots secrets that were never told.”

The author’s got some interesting blog posts about the process of writing and publishing Vodnik over at his site.

The publisher, meanwhile, has got some posts up about how the cover was designed. Neat!

You’ll note that Bryce had quite a bit of input into the process here. With a smaller company, it’s easier to coordinate with the author for suggestions. While we still have to take marketing information just as much into account when planning covers, we want our authors to be happy with the end result. Their ideas help inspire the designer and I think the covers are better for it. I also show my authors concepts–once we’ve narrowed it down to the best possibilities–so they can point out things I might have missed.

And finally, here’s an interview with the author at Kimberly Pauley’s blog.

Review: The Extraordinary Adventures of Alfred Kropp by Rick Yancey

We Can Fix It: A Time Travel Memoir by Jess Fink

The Dead of Winter by Lee Collins